Termites live in colonies which are made up of different types of termites performing different tasks. There can be hundreds of termites in a colony or in some cases millions depending on the type of termite.

These colonies take various forms again depending on the type of termite. There are ground mounds which can be readily seen in the Northern Territory. These termite mounds can be very large and have a hard outer casing.

Tree nests are common and often contain thousands of termites. These nests have contact with an internal cavity of the tree.  Subterranean nests are underground and often in the base of trees. These termites don’t kill the trees but often weaken them causing the tree to collapse. Tree wood colonies support termites in the branches and trunk of the tree. 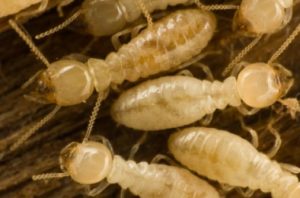 Worker termites make up the biggest number within any colony and  have no eyes and or reproductive organs therefore they do not reproduce. These termites are mostly white and often coloured by the food they are eating. Workers rarely leave the colony where conditions are humid and temperatures high and do the work of the colony such as food gathering, feeding the young, repairing damage as well as feeding and tending the queen. The workers build tunnels from the nest as they forage for food therefore they are always within a conditioned environment.

Soldiers are mainly responsible for defending the colony from other insects such as ants. Their heads are larger and darker than the workers and have darker bodies. Again like the workers, the soldiers do not have developed reproductive organs.

Some colonies have two different types of soldiers that are distinguishable by size.

Reproductives are the sexual forms of a colony and therefore, are the future kings and queens of new colonies. They are a darker colour than workers and soldiers, have compound eyes and are able to cope with the outside environment more efficiently. If the queen dies or degenerates then  a reproductive can take its place ensuring the longevity of the colony.

Once these reproductive termites are fully winged they are ready to leave the colony and  set up new colonies. The colonising flight occurs during moderate temperatures and high humidity similar to the conditions within the nest. These flights often occur before or after a storm.

The colonising flight usually originates close to the main nest and often a breach is made allowing thousands of winged forms (alates) to leave. These flights usually occur during the November and December as well as March and April.

Most termite species are grass and debris feeders and these don’t usually endanger buildings. Termite species that attack wooden buildings eat cellulose, starches and sugars, which they obtain from the timber. These termites obtain their protein from fungi that grow in and on the surface of the wood, usually in moist soil situations.

Termites spend most of their lives in high humidity and temperature conditions found within their nests. The relative humidity of a nest is usually around 100%. Subterranean termites obtain most of their moisture from the soil and in this way they are able to maintain the colony’s humidity. They can also use moisture evaporation  for lowering the temperature in the colony.

Subterranean termites will build tunnels that can extend 200 metres or more from the nest. This is why disturbing termites when you find them is the worst thing you can do. The workers will very quickly close down a tunnel that has been attacked by outside forces. They will then build a new tunnel from the nest in another direction. This makes it almost impossible to treat the problem. Learn more about detecting termites in your home.

If you find live termites leave them alone and call Hitman immediately. An experienced technician can then check your home without further disturbing them and recommend a suitable course of action.

Treating your home, inside and out for: Cockroaches, Ants, Spiders, Silverfish.

Full 12 month service warranty, even on ants and spiders

20 years in termite and pest treatments!

Want to become a Hitman Franchisee?